"A drink in my hand, my snow up against the burning sand, probably getting gorgeously tan in summer!" -Frozen
Yes, my friends. There is Starbucks at Disney. 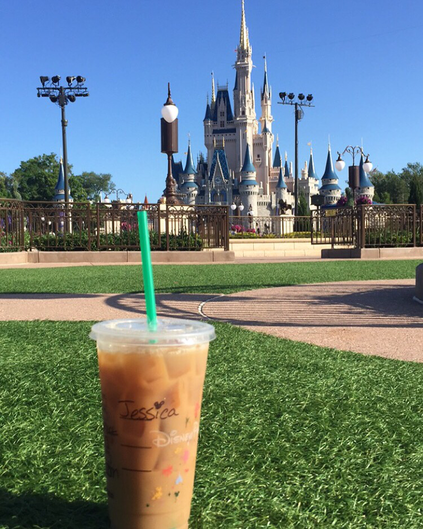 Starbucks is located in all four parks and also has two locations at Disney Springs (formerly Downtown Disney).

Magic Kingdom: Main Street, USA, on the right hand side. It's about halfway down Main Street, where the bakery used to be if you've ever been to Walt Disney World before Starbucks was there. I think it's actually called the Main Street Bakery.

Epcot: To the right of the fountain behind Spaceship Earth before you get to the World Showcase. Next to Club Cool.

Hollywood Studios: Under the name Trolley Car Cafe, it's near the intersection of Hollywood Blvd and Sunset Blvd when you first enter.

Animal Kingdom: Under the name Creature Comforts, it's located just before the bridge that takes you to the Africa section of the park on your left hand side.

Disney Springs: One is near World of Disney, and the other is on the other side of Disney Springs near Cirque du Soleil and House of Blues (directly across from the Star Wars Galactic Outpost and next to the food trucks).

So, what's the big deal?

Starbucks being at Disney is a Weight Watcher members dream come true because it's something you can track. Not only are there so many 0 sp drink options available (an unsweetened iced tea on a hot day at the parks? Yes please!) and some other low point drink concoctions that we've all whipped together at Starbucks, but unlike the rest of Disney Parks, you can actually accurately track the food here since Starbucks offers more than just junk food and pastries. If you're desperate and you don't mind skipping out on park food (which, in my opinion, isn't anything super special so you wouldn't be missing much) if you're eating at the park, know that these are options available to you that you can count your points for.